After Christmas, we stayed in Marsh Harbor until Friday, December 30th.  Between Christmas and the 30th on December 27th to be exact, we along with the crew from Dreamer II (Bill, Kim, Walt & Pat) rented a car to run errands around Marsh Harbor and explore a bit driving down to Pete's Pub, a little eclectic place, located south of Marsh Harbor.  After a 30 minute drive, remembering to always drive on the left side of the road, then a turn left down a slightly bumpy dirt road and presto we arrived at Pete's Pub.

Since our last visit in 2003, Pete's Pub has expanded but overall it has not changed much especially the "Blaster" which is still an excellent rum cocktail with a well deserved reputation.  Pete's Pub has a restaurant that looks as though it's been put together with whatever is lying around the beach and a gallery which houses artful bronze castings.   We relaxed, walked along the beach and shopped in the gallery before enjoying a delightful lunch consisting of fresh grilled fish sandwiches.  After a few hours at Pete's Pub, we returned to "downtown" Marsh Harbour, ran a few more errands (i.e. grocery shopping) and then called it a day.  It was sad to see, but, Kim, Bill's wife, left the Abacos on Friday and returned back to the States.  Kim was a delightful presence in our group and it was truly a pleasure to meet and get to know her.  She will be sorely missed and hopefully we'll have the opportunity to travel with her and Bill again soon.  Bye Kim!!


We spent a few more days anchored in Marsh Harbour then set sail on Friday, December 30th for Tilloo Cay which we heard was having fireworks and besides it was on our way south to the Exumas.  We left Marsh Harbour around noon arriving in Tilloo Cay at 3:30 p.m. having a very nice sail along the way.  We had Dreamer II (Bill, Walt & Pat) over for dinner and enjoyed a wonderful display of fireworks which lasted about 45 minutes.  It was a wonderful treat.  The next day we went snorkeling where Pat spotted a lobster and Walt managed to capture it. YEAH!!  With fresh lobster in hand, we all returned to our respective vessels and rested. 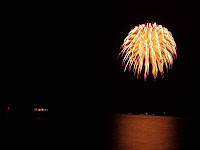 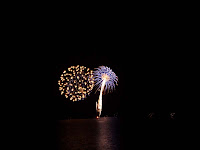 After a short nap, we left Tilloo Cay around 4 p.m. and sailed overnight arriving in Highborne Cay around 2 p.m.  Now, Highborne Cay was not our original destination which was Cambridge Cay roughly 26 nm south.  I know it was New Years and we did yell a celebratory "Happy New Year" into the VHF on channel 16 while simultaneously dodging the large ships which traverse the Northeast Providence Channel.  We safely passed in between several large vessels and also heard them exchanging "Happy New Year" celebrations between them.  Everyone was ringing in the New Year.

We arrived at Fleeming Channel around 7 a.m. which was intentional since we wanted to cross the banks with good light.  Good light became imperative crossing the banks called the Middle Ground, because we were continuously weaving around coral heads especially as the water depths dropped.  We managed to sail through the banks without incident but another vessel wasn't as fortunate.  They apparently hit a coral head and came to a sudden stop.  Though it was quite concerning, no damaged was sustained to the vessel and they continued their travels across the banks.

After crossing the banks, we decided to divert to Highborne Cay because Dreamer II was experiencing a mechanical problem.  Both vessels came through the pass without issue and anchored at Highborne Cay.  The guys (Walt, Rankin and Bill) troubleshooted and resolved the mechanical issue aboard Dreamer II then, after we had cocktails to celebrate everyone a bit tired from the trip, turned in for the night.
Posted by Sandy at 11:36 AM
Email ThisBlogThis!Share to TwitterShare to FacebookShare to Pinterest
Location: Tilloo Cay, The Bahamas