Before we began our update, we want to wish everyone a very Happy Holiday Season.   We hope you had a wonderful holiday celebration as we did here in the Bahamas.

We've spent the past few weeks cruising around the various islands which make up the Abaco Islands.  In between bouts of high winds which keep us in harbor, we cruised around to Treasure Cay, Hope Town, and Great Guana.

On Wednesday, December 7th we left Marsh Harbor and had a wonderful slow sail to Treasure Cay.  Like Marsh Harbor, Treasure Cay is part of Great Abaco Island, however, it is located north west of Marsh Harbor.  Treasure Cay is a vacation community and you can see cute light colored yellow, green, blue and pink condominiums dotting the waters edge near the anchorage.  It's a small community with a just few shops, a grocery store, bakery, and a couple of restaurants.  One restaurant, the Tipsy Seagull has a swim up pool bar and another nearby (of course everything is nearby) restaurant, Coco Beach, has a spectacular view of a long beautiful white beach which runs along the Abaco Sea. 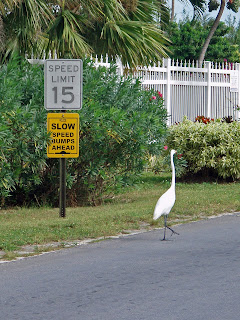 After a day or so in Treasure Cay, we sailed back to Marsh Harbor arriving on December 9th to join up with our friends Dave & Camilla on Southern Heat.  Weather had kept them hold up on another island, so this was our first opportunity to meet up with them in the Bahamas.   The weather kept us harbor bound for almost a week and when you can't snorkel the other alternative is to eat, drink and be merry.  We entertained ourselves watching football (Army vs. Navy ... go Navy!) and making homemade ice cream (YUM!).  Rankin got a Cuisinart (CIM-22 Series) ice cream maker for his birthday and this was our first opportunity to use it.  We made vanilla ice cream and it was delicious.


We waited almost 7 days for winds to abate finally on Thursday, December 15th we left Marsh Harbor along with Southern Heat destination Hope Town.  With winds blowing 15-24 knots we had a nice and quite fast sail to Hope Town racing along with Southern Heat who arrived ahead of us.  Hope Town (downtown) is located on the northern part of Elbow Cay and it is an idyllic Bahamian town with it's quaint cottages decorated for Christmas and the candy striped lighthouse decorated with Christmas lights which serves as a backdrop.

Upon our arrival, we walked around town enjoying the beautiful scenery as we quickly made our way to Vernon's Grocery for a Key Lime Pie.  If you haven't tried Vernon's Key Lime Pie it's worth a stop and the $15 cost.  The next day (December 16th) we rented a golf cart and along with Dave, Camilla and Rider (their dog) puttered around Elbow Cay exploring the northern and southern part of the island.   We were surprised to see many large beautiful rental cottages, homes and a few resorts  located in the southern part of the island along with pretty Tahiti Beach. 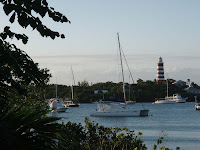 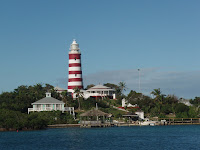 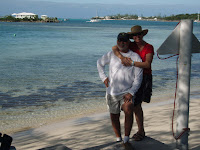 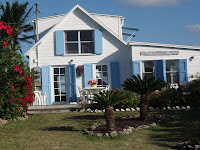 Our friends Walt, Pat and Bill (Pat's brother) recently arrived Marsh Harbor on the sailing vessel Dreamer II, so we departed Hope Town on December 17th and had a nice downwind, watermaking sail to Marsh Harbor.  Once in Marsh Harbor, Walt & Pat joined us on our boat while Bill and his family and friends (Kim, Catherine, A.J., George, Laurie & Abbey) stayed on Dreamer II.  Now, it's time to cruise with Dreamer II.  We stayed a few days in Marsh Harbor just long enough to enjoy a little bocci ball before returning to Hope Town again on Monday, December 19th.   We spent the night in Hope Town exploring the downtown area with Dreamer II this time skipping the Key Lime Pie.  The next day (December 20th) we left Hope Town and sailed south to Baker's Rock near Tahiti Beach.  We arrived around 2:30 p.m. which gave us enough time to snorkel around Tahiti Beach and then everyone came aboard Gypsea Heart for a steak dinner.  George, Lauri & Abbey were kind enough to donate steaks for the entire group.  Thank you George, Laurie & Abbey for sharing the delicious steaks with us.


We left Baker's Rock early (around 8:30 a.m.) on Wednesday, December 21st to catch high tide for our sail to Great Guana.  It wasn't a fast sail, but very peaceful and pleasant dropping the hook in Great Guana around noon just in time for lunch at Nipper's.  Nipper's is a restaurant and bar just a short walk from the anchorage.  Upon our arrival, we relaxed and enjoyed the wonderful Caribbean music, the beautiful view of the ocean, a Nipper's cocktail and the BEST cracked lobster ever!   Unfortunately, we were limin' and did not get a single photograph perhaps during our next visit.  Once everyone was finished with lunch and exploring the beach, we returned home (Gypsea Heart).

The next day we left Great Guana motored a short distance to the tip of Baker's Bay had a quick snorkel and then sailed to Treasure Cay.  We were again at Treasure Cay this time with Dreamer II then later Southern Heat (Dave & Camilla) dropped a hook.  We spent just a couple of nights in Treasure Cay having lunch at Coco Beach restaurant, enjoying cocktails at the pool at the Tipsy Seagull, and making a few purchases at Abaco Ceramics where you can buy hand painted items and meet the artist, Karen.

On Christmas Eve after doing a few chores, we left Treasure Cay about thirty minutes after Southern Heat and had a very nice and quick sail to Marsh Harbor.  During our sail, we caught a nice photo of Southern Heat as we passed.


Posted by Sandy at 6:15 AM
Email ThisBlogThis!Share to TwitterShare to FacebookShare to Pinterest
Location: Abaco Island, The Bahamas