We left Highborne Cay on Monday, January 2nd around 10 a.m. with fishing and sailing in mind.  I guess between the two boats, we each had a different priority of the two thoughts.  While we were trying very hard to sail and did have a very nice spinnaker sail with our fishing line trolling through the water, Dreamer II was motorsailing along the coast also with a line in the water.  Dreamer II was far more successful fishing catching a nice size mahi mahi.  Though we didn't catch any fish, we did catch something ... a bird.  It was the only thing that came aboard the boat that afternoon.


We finally made it to our original destination Cambridge Cay around 5 p.m. with Dreamer II (Bill, Walt & Pat) arriving about an hour earlier.  Dreamer II came aboard and everyone enjoyed a wonderful fresh fish dinner that evening.

The next day everyone was hunkered down in their boat as a cold front pushed winds into the 20-30 knot range.  After one day on anchor, both Dreamer and Gypsea Heart moved to a mooring ball for about $20/day well worth the hours of sleep being on a mooring will provide.  Since the weather wasn't cooperating for exploration or snorkel trips, Dreamer came over for dominoes, dinner with dessert (brownies and ice cream) MMMMM. 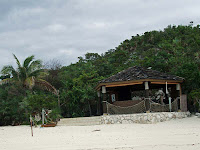 On Wednesday, January 4th, the wind had finally settled down enough for us to move, so we slowed motored through the shallow depths and corals heads then anchored at Hall's Pond Cay.  It was a cold day, but the sunny was out so why not explore.  Pat had mentioned that she heard that Johnny Depp owned this Cay, however, we weren't positive.  Though as we dinghied closer to the beach and spied the "Restricted Access" signs posted ashore, we were beginning to believe this rumor.   I did a little checking and it is true Johnny Depp does own this island.  Here's what I discovered, "After falling in love with the laid-back Bahamas lifestyle while filming “Pirates of the Caribbean”, Johnny Depp began a search for his own tropical island to get stranded on. And in 2004 he found it in the beautiful Exumas, buying Little Hall’s Pond Cay for US $3.6M as a retreat to enjoy with his songbird wife Vanessa Paradise and their two children. 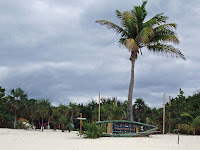 The actor recently made news by publicizing that his island will be run exclusively on eco-friendly solar power. There’s little question that escaping from the prying eyes of the paparazzi was also a prime motivator for Depp’s island purchase- he supposedly refers to his little piece of paradise as “F**k Off Island”."   Well, that says it all.  We didn't see Johnny, so sorry to disappoint, but here are a few photos which shows a little beach and various amenities that to me has Johnny written all over it especially the "Restricted Access" sign with the skull and cross bones.


The next day everyone (except me) snorkeled at the "Aquarium" while I relaxed aboard Gypsea Heart.  It was sad but today was our last day with Dreamer.  We were each going our separate ways.  We were leaving this afternoon for Conception Island and Dreamer was headed to Staniel Cay.  We had a wonderful time cruising with Dreamer and everyone aboard.  They will be sorely missed ... until the next time.

Posted by Sandy at 1:00 PM
Email ThisBlogThis!Share to TwitterShare to FacebookShare to Pinterest
Location: Halls Pond Cay, The Bahamas