We arrived here on Sunday, October 30th my dad’s birthday … HAPPY BIRTHDAY, DAD!!!.  After a fantastic sail, we dinghied over to Astarte. During cocktail hour we admired this beautiful sunset behind Gypsea Heart.  What a great way to start an evening.

Then we were treated to a spectacular dinner with our main course being Veal Cordon Bleu with rotini pasta and salad.  The main course was followed by a delectable chocolate pudding topped with mini chocolate chips.  MMMMM!!!  We were so pampered and loved every minute of it!  We enjoyed wonderful conversation about movies, music, books and even touched upon our past work lives a bit.  Michael and Barbara have both had very interesting work careers in the “TV bizz” which they shared with us along with some very funny stories ... can't reveal too much for privacy reasons.  They are both also avid readers, so often they will share with us books they have read like “Getting Stoned with Savages” by J. Maarten Troost, “Kingpin” by Kevin Poulsen and several others. Thank you so much Michael and Barbara for a wonderful evening!!  Rankin has read “Getting Stoned with Savages” and he has encouraged me to read it too which means he gives it a good review.  It is on my list along with “Kingpin which I can’t wait to read.  However, I am still working my way through the Game of Throne series for which I am 75% through Book 3 “A Storm of Swords”.
After such a wonderful dinner last night, I needed to get a little exercise.  Rankin enjoyed his morning coffee aboard Gypsea Heart along with some quiet time while I kayaked ashore and circumambulated (a new word I learned from Barbara) the island using my toe shoes that my sister, Angie, gave me some time ago which I just now started using.  Sorry, Angie, I just forgot they were in my closet though great little shoes.

There’s a nice walking path around the island which runs along a beautiful white beach.  Apparently, many local people come by small power boats and camp on the island for the weekend.  The camp sites are very nice with picnic tables, grills and covered areas which I saw being used to string up some hammocks.   I can see why people would like to camp here the camp site views are stunning.  My nephew, Donnie, and his family are no strangers to camping, and as I was strolling around this island I couldn’t help but imagine how much they would enjoy camping out here … check it out, Donnie!

It took about an hour or so to circumambulate the island and that included time to read all the posted signs which were in French and English (thank goodness).  All along my walk, I kept seeing these fairly large burrows in the ground, and I couldn’t help but wonder what creature occupied them. On the south part of the island, there’s a tall white column about 10 meters (30 feet) high.   Per the signs, “Captain Tardy de Montravel had chosen this islet as a a sea-mark for vessels heading for Port-de-France. He erected a "triangular pyramid made of wooden spars and coral blocks 10m in height". In 1860, Captain Saisset replaced the spars with a pyramid of coral stones and rubble. A tall coral limestone column still stands on the islet. This is what gave the islet its name of "Signal" (marker in French).  The islet was named Senez Islet by Captain Tardy de Montravel in memory of Officer Vincent Senez, who explored the bay of Port-Laguerre in Paita.”

On the opposite side of the island, I saw a huge nest which I thought was for a sea hawk, but apparently there are ospreys on the island too (per the signs).  The nest did look a lot like an osprey nest, however, seagulls were occupying the nest.  To  my surprise, they were dive bombing seagulls too.  As I walked along the path which wasn’t that close to the nest (at least in my opinion), I was attacked by seagulls.  They were loudly squawking and swooping down upon my head.  I ducked my head and ran along the sandy path while trying to avoid stepping into any burrows until I could safely reach a tree and took cover for a while.  The seagulls were persistent, so I had to make a break for it running and ducking from tree to tree.  This went on for a while until I was finally out of range.   Sorry there are no pictures or video of this experience … too bad, huh!  I am really sorry Rankin missed this experience.
Now that I was safely out of harms way, I noticed some of the plants on this island.  One had red and green leaves which I thought was interesting (see below) and Michael on Astarte later told me it was a poinsettia.  Besides cooking, I don’t have a lot of experience with plants either which is probably pretty obvious now.  The only poinsettias I’ve seen have had solid red leaves.  I didn’t know that poinsettia leaves could be red and green at the same time.  Pretty plant!
Signal Island is a marine reserve, and all land and sea life are protected.  There are five species of seabirds which nest on the island.  There are three species, the Tahiti petrel, the black-winged petrel and the wedge-tailed shearwater which can be seen at night on the islet where they dig burrows.  This explains all the burrows I saw around the island (they were everywhere).  When I was hiding from the seagulls, I heard some cooing sounds from one of the burrows too.  The other two species are the red-billed gull (most common species) and the bridled tern (only observed in the hot season).  There are also osprey here too, and of course, seagulls.

We didn’t snorkel this visit, because the wind picked up which made the anchorage uncomfortable.  However, below are a few pictures from our last visit to Signal.  The sea life is beautiful here and there are many turtles swimming about.  During our last visit here, we snapped a photo of this guy (sorry for the quality). 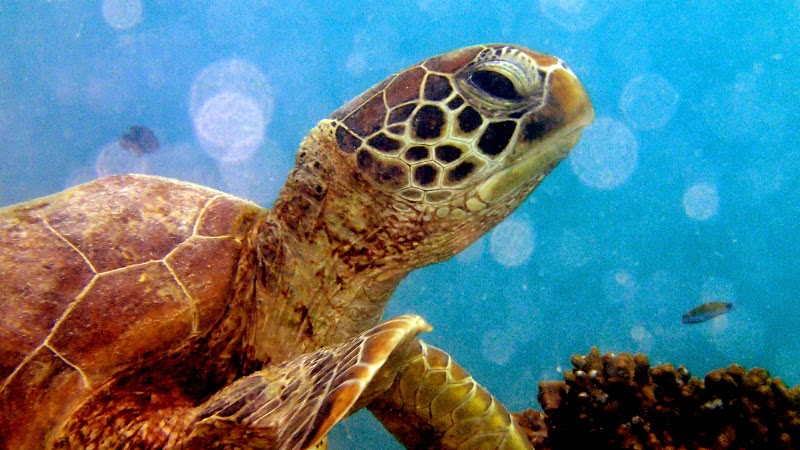 We couldn’t stay long at Signal Island, but it was a pleasant visit and we really enjoy visiting this island.  We left Signal on Monday, October 31st and sailed North to Baie Maa for some protection from the wind.  You’ll never guess what we saw at Baie Maa ... keep reading!!!
Posted by Sandy at 6:00 PM
Email ThisBlogThis!Share to TwitterShare to FacebookShare to Pinterest
Location: Îlot Signal, New Caledonia