We left Ilot Ua around 8 a.m. after listening to the Gulf Harbour Radio net on SSB (8752 Mhz which begins at 6 a.m.).  We had a beautiful sail to Ilot Amedee taking the scenic route (which is not the most direct path) and traveling along the very edge of the Southern Lagoon reef.  It was a beautiful sunny day and the we cruised along at a moderate ~5 knots with just the jib (most forward sail).


We could see where Ilot Amedee was located several miles off because there's a lighthouse on the island which of course can be seen from miles away.  It only got prettier the closer we sailed to it.  Per the Rocket Guide, Ilot Amedee is a Natural Reserve (Southern Lagoon Park), and there are mooring balls in the area so people will not anchor and harm the reefs.

Good thing, because as we were leaving Ilot Ua our windlass (the thing that raises and drops our anchor) deciding not to function in the down direction.  We discovered it will actually lower the anchor using the weight of the anchor; however, if there's nothing pulling it will not drop.  I am not doing a very good job explaining the issue, so let's just say we can still anchor but it was good to just pick up a mooring instead.  We also discovered a "head" (toilet) issue in our owner's cabin head.  Now, I am really not going into any details there either, but Rankin cleared it up.  Thank goodness ... it's a nasty job.   We were finally settled but only after I dropped the boat hook (which luckily floats) while trying to bring up the mooring ball.  A lovely man moored in front of us assisted us with secure Gypsea Heart to the mooring.  After such a wonderful sail, the windlass, head and mooring issue were all left behind us.


I would love to tell you that we had a fantastic afternoon and evening, but alas, it wasn't in the cards.  First, the Rocket Guide indicated there was internet here which there was but very, very slow ... practically non- existent until I placed the phone on the stack pack (the highest point on the boat without raising it using a halyard).  We were still content at this point, because we could at least get email messages plus we were going to run off snorkeling anyway.  Shortly thereafter, the wind must have switched directions with a more Northern component, because the waves were rolling in.  Nope, we didn't see it in the weather forecasts.  Oh My!  It was one of the worst experiences we've had in an anchorage here in New Caledonia.  We were facing into the wind and waves which caused us to pitch forward, aft, forward, aft.  UGH!!!  I think we had 2 foot seas rolling into the mooring field.  UGH!!!  I was feeling pretty ill ... nothing like being seasick while on a mooring.

Rankin could tell I was feeling pretty ill, so he offered to cook dinner.  YIPEE!!!  What a wonderful treat ... things are starting to look up again.  I thought it was quite a romantic gesture for Rankin to cook dinner for me.  I was feeling pretty special ... the tune "Love is in the Air" was playing in my mind.  SPECIAL NOTE TO FAMILY MEMBERS:  Prue and Steve, you may want to look away at this point. 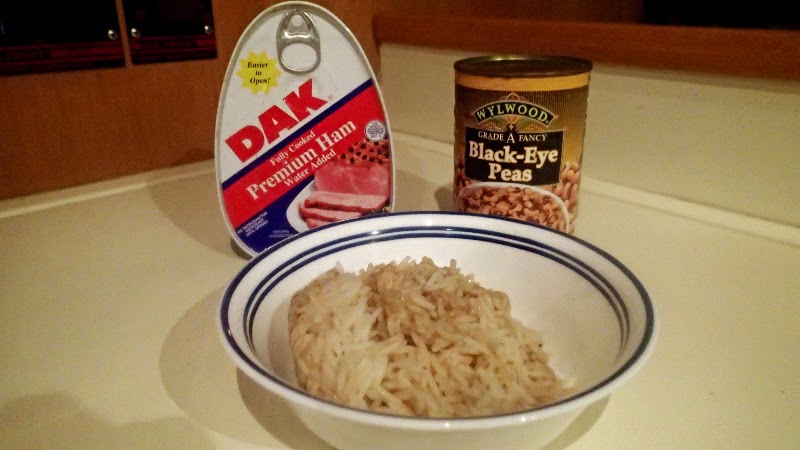 I have to admit I am not a fan of canned ham, but  I truly loved watching my Texas Southern Gentleman cook me a gourmet meal.

It was a lovely dinner.  It was still bouncy most of the night, but did settle down a bit much later in the evening.  We left for Noumea the next day with a memorable experience from Ilot Amedee.  Au Revoir!!

I downloaded the second pic and it's now my back screen on our computer!!!!
W/P

We're in a whirlwind storm right now. We just accepted an offer (today) on our house in Chattanooga and will be signing a contract on a new constructed house in Tellico Village, within the week. We leave Wed for Calif to see our family as corey's there now visiting. Then we have to plan a return trip back to Chattanooga to get things moved before Dec 15 for the closing. Then back here in AZ for Xmas when Chad's family shows up. Maybe we should come and visit.
Love you guys.

W/P - Congratulations on selling the house and the building of a new home. WOW! How exciting. You do have a lot going on. We hope everyone is doing well. Have fun with the grandbabies. We'll be looking for pictures on FB. If you ever want to visit, there's always room for y'all. Miss and love y'all too. S/R