After spending about two months in Charleston, South Carolina enjoying the beautiful city and waiting of hurricane season to end, we finally began making our way south.  We left Charleston on Sunday, November 13th made a quick overnight stop in Fernandina Beach, Florida on the 14th where we met up with our friends Dave and Camilla aboard Southern Heat.  We strolled for cocktails at Green Turtle where they served $2 Pabst Blue Ribbon (PBR) and $2 Budweiser ... what a deal.  Then had a nice dinner at Espana located on Fourth street which was recommended by our bartender at Green Turtle. 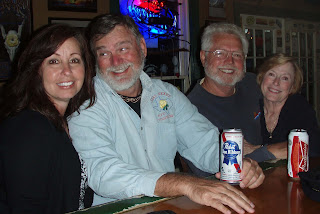 We left Fernandina Beach the next morning at 4:00 a.m. and we arrived in St. Augustine, Florida on November 15th and grabbed a mooring ball for $20 a night.  Twenty dollars a night is not too bad considering it includes a free water taxi service, free pump out service and access to laundry, showers and the dinghy dock.  We spent the next four days touring the city and doing a few chores like laundry.  Our friend Jerry came down for a night.  Though he only spent one night, he drove us around to West Marine (boat store), Winn Dixie (grocery store) and a local marine store which sold used parts for less.  While waiting for Rankin to make some final purchases in one of the marine stores, Jerry and I enjoyed some "raw" snacks and organic drinks at a nearby restaurant ... he didn't love it.  Thanks so much Jerry for being such a trooper.  That same evening, we went to the Lighting of the Lights downtown and had a wonderful dinner at Columbia, a nice Cuban restaurant. 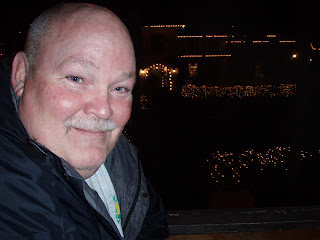 It was a quick visit in St. Augustine because it's time to head south, so we left Sunday, November 20th after dropping Jerry off at the fuel dock while we topped off the tanks.  We sailed slowly (at times around 2 knots) down to West Palm Beach, Florida and arrived today November 22nd.  We'll only be here about 6 hours, because there's a weather window to cross the gulf stream to the Bahamas.  So we'll take a quick nap, have dinner and then leave for the Bahamas around 10 p.m.  We should arrive the Bahama Banks around 7 am and we should be anchored by tomorrow afternoon.  That's all for now but we'll keep you posted.  Take care everyone and have a wonderful Thanksgiving.

Posted by Sandy at 11:29 AM
Email ThisBlogThis!Share to TwitterShare to FacebookShare to Pinterest
Location: St Augustine, FL, USA