We arrived safely in Charleston harbor yesterday around noon.  We're booked at the Charleston City Marina for a month which is located about two hour (sailboat time) down the harbor.  As we motor down the harbor, we slowly cruise past Fort Sumter on our port side ... it hasn't changed a bit.  The starboard side is lined with beautiful southern homes. 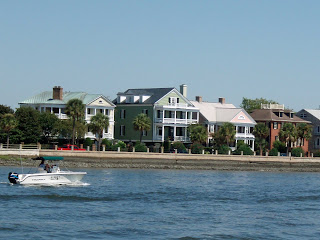 We continue down the harbor and immediately notice the "new" bridge.  The last time we sailed into this harbor was 2003 and we were pretty sure this bridge did not exist at that time.  We later found out it's called the Arthur Ravenel Jr. Bridge.  Here's a quick Wikipedia excerp, "The Arthur Ravenel Jr. Bridge, also known as the New Cooper River Bridge, is a cable-stayed bridge over the Cooper River in South Carolina, connecting downtown Charleston to Mount Pleasant. The eight lane bridge satisfied the capacity of U.S. Route 17 when it opened in 2005 to replace two obsolete cantilever truss bridges. The bridge has a main span of 1,546 feet (471 m), the second longest among cable-stayed bridges in the Western Hemisphere."   It's quiet attractive especially today since a sailboat race is about to begin and there are many boats cruising around vying for the best position with the bridge displayed in the background.  By the way, the sailboat race was cancelled due to lack of wind.

We finally arrived and docked at the Charleston City Marina around 2 p.m. and proceeded to get the boat settled (connecting power and TV cables, etc.).  Then, it was shower and nap time.  Walt and Pat arrived at 6 p.m. and we had a splendid evening sharing new stories and reminiscing about old cruising exploits.  We are truly looking forward to spending the next two weeks with our friends and enjoying Charleston.

Posted by Sandy at 6:07 AM
Email ThisBlogThis!Share to TwitterShare to FacebookShare to Pinterest
Location: 71 Broad St, Charleston, SC 29401, USA