On April 8th, we had a wonderful though slow and short (approximately 7 nm) sail from Pier 21 Marina in Auckland to Rangitoto Island. It was a beautiful sunny day with calm seas and an easy downwind sail with the jib moving us along at a slow 4 knots just right to enjoy a sail after being in a marina for a week.  I snapped this shot of Rankin as we drifted by the Auckland city skyline doesn't he look happy. 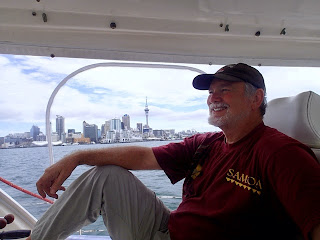 We arrived at the Islington Bay anchorage at Rangitoto Island mid afternoon just thrilled that we are on "the hook" again.  It was calm and beautiful though every now and then a slight roll would make its way into the anchorage rocking the boat every so slightly reminding us that we're on anchor again.

Rangitoto has an interesting history.  It's the youngest of Auckland's volcano's erupting from the sea only 700 years ago and rises to 260 meters (853 feet).  It's joined to another island (Motutapu) by a causeway and the two islands have very contrasting landscapes.  Though we didn't get the opportunity to hike around Motutapu, we were anchored between the two islands and the contrast is apparent even from the water though more so after you've hiked to the summit.  Rangitoto and Motutapu are both pest free which means no rodents or lizards which was quite an effort for the New Zealand Department of Conservation (DOC).  DOC has removed nine animal species from the islands. Possums and wallabies were eradicated in the 1990s. Ship rats, Norway rats, stoats, mice, feral cats, hedgehogs and rabbits have now been removed with the completion of a major eradication operation that began in June 2009.  The purpose of the eradication is to eliminate non-native species from the island.

I believe in the picture below you can get an idea of the contrast between the two connecting islands of Rangitoto and Motutapu.  This picture was taken from the Rangitoto Summit.

Wednesday, April 9th, we had a nice quiet morning drinking espresso, browsing the internet and having breakfast ... let's put it this way we were in no hurry to get moving ... as if we ever are, but it was getting late and time for our hike.

Around 12:30 p.m., we lowered the dinghy, jumped in and headed to the Islington Bay Wharf, so we could begin our hike to Rangitoto Summit.  We arrived at the wharf, tied up the dinghy and immediately noticed a large white ship tied up to the dock using a crane to load items.  As we walked past the ship, we saw many, many people waiting (probably 30 people or more) on the wharf.  They all had one thing in common; they must have all been at least 70 years old or older.  We were surprised to see everyone, because we thought the only ferry came into the Rangitoto Wharf which is located on the South part of the island not to Islington Bay Wharf.  It was a pleasant surprise and nice to see everyone enjoying this wonderful island.   We waved to everyone, said our greetings and began our hike.

Most of the hike (meaning about 2 hours) was along a brown/black lava rock road with old lava flows dotting the landscape and beautiful bird calls as our music.  It was a nice, cool and sunny day, but it did get warm hiking through the sunny parts as we made our way up the slight incline to the summit.

During our hike, we would hear what seemed like a variety of bird calls as if many birds where singing all around us though we discovered it was coming from one bird as we spotted him/her.  The bird was fairly large (for a bird), and looked black with a white tuff on its chest.  Of course, this is from a distance. Though the bird swooped down behind us and landed on a nearby branch where we could stop and watch it for a bit.  We are not birders so, of course, didn't know the name of the bird at that point, but looked it up later and found it was the Tui.   A very pretty and musically bird (and the name of a local beer).

We continued our hike and saw very few people, actually only seven total.  About an hour into the hike, we arrived at the boardwalk which leads up to the summit which is another 30 minute slightly steep hike.  At the base of the boardwalk was a tractor with a tram (wish I would have gotten a picture of it) to transport people up to the boardwalk (cheaters) from the Rangitoto Wharf and possibly Islington Bay Wharf too.  This might explain the 70 year old plus group at the Islington Bay wharf.  The boardwalk offered spectacular views where we spotted Gypsea Heart safely anchored in Islington Bay near Yankee Wharf.   We enjoyed the views and peacefulness while resting on a bench and snapped a few photos.  Here's Rankin with Gypsea Heart anchored far away in the background. 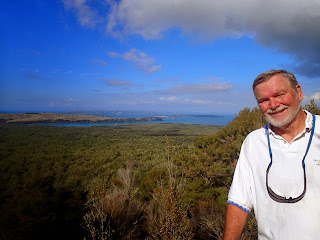 We arrived at an overlook which offered a view into the cone of the volcano.  However, trees covered the cone, so the view wasn't as dramatic as some we have seen.   We hiked an additional 10 minutes up the boardwalk where we found some of the best views especially of Auckland.   We tried to capture the picturesque view of Auckland with a sailboat in the forefront, a spinnaker flying.   Hopefully, you'll get an idea of the views from this photo below. 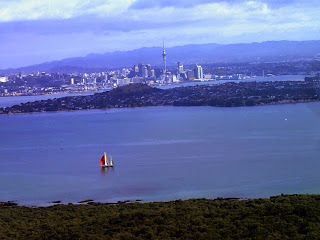 We relaxed and enjoyed the view for more than several minutes then noticed there was an information sign in a nearby building which I think was is called a Bach.  Many bees were around which drove me out pretty quickly though Rankin continued reading until the bees got so loud he also decided it was best to leave.  We continued our hike on the trail around the summit.  This trail was red in color which we assumed was from the iron in the soil.   It only took about 15 minutes to circle the summit then we began our hike back.  It was around 2:30 p.m. and we still had an 1 1/2 hour hike back.

The return hike went much faster and easier (naturally) though it wasn't uneventful.  As we were hiking back, a Kakariki (which looks like a parrot) swooped down in front of us and quickly flew off.  No time to take a photo, but trust me the bird was beautiful and much larger than I expected.  I found this photo online, so you could see this exceptional bird.  We also saw a Saddleback Tieke which is a black bird with medium size brown spots on its back which kind of looks like a saddle, hence the name.  The only working person we saw was a man and his working dog on a ATV motoring down the summit.  He was nice enough to stop for a photo shoot for us. 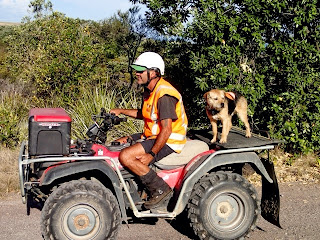 We made it back to the wharf by 4:30 p.m. unfortunately, we had to pass up hikes to the lava caves which would have taken an additional 30 minutes and hikes to the Wrecks which would have taken another hour.  It's a shame because both hikes would have been interesting.  I don't think I need to elaborate on why the lava caves would be interesting.  If you decide to go to the Lava Caves bring a torch (flashlight).   The Wrecks is where you can view the wrecks from ships which were run ashore during WWII because they were outdated or too expensive to repair (no recycling back in those days), so the easiest solution was to drive them ashore where they would be out of sight and leave them to rot or rust away.  Wreck Bay and the adjacent coastline of Rangitoto is a graveyard for at least 13 ships that were dumped on the island between 1887 and 1947.  FYI - The wrecks are best visited at low tide and it is about an hour and 15 minute hike from Islington Bay Wharf.  I have read that the deeper wreckage just offshore attracts a variety of fish and other marine life and can be appreciated by snorkeling or scuba diving.
Posted by Sandy at 5:30 AM
Email ThisBlogThis!Share to TwitterShare to FacebookShare to Pinterest
Labels: New Zealand, Rangitoto Island
Location: Rangitoto Island, 1010, New Zealand