We left Port Antonio, Jamaica on Thursday, February 2nd around 5 p.m. and had decent night sail to Montego Bay, Jamaica.  We dropped our hook in the harbor which was a feat in itself because there was very little room.  When our friends, Debbie & Terry on the sailing vessel Wings who arrived just ahead of us, went into the marina it freed up a nice anchor spot for us so we quickly grabbed it.

Montego Bay has a very nice yacht club with soft comfortable chairs and a nice billiards table, however, traveling into town requires a taxi.  So, of course, we took a quick tour around Montego Bay stopping at the Mega Mart (the name says it all and we just couldn’t resist) and hitting some “cruise ship” touristy places like Jimmy Buffet’s Margaritaville.  The tour of the city was quick only a few hours, because besides shopping there wasn’t much else to do or see.  The next day we watched the Super Bowl enjoying a wonderful meal of jerk chicken while watching the game (New England versus New York Giants) on a big screen projection TV. 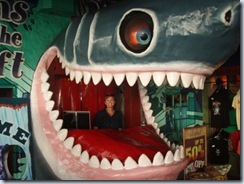 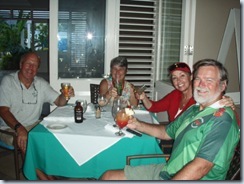 Finally, on Tuesday, February 7th, we got a good weather window for our sail to Panama.  The original plan for a trip to Columbia was cancelled Mother Nature just didn’t want to cooperate, so we headed for Panama.  We left Montego Bay around 7 a.m. and four days later, we arrived in Portobello, Panama on Saturday, February 11th around 9:30 a.m.   The sail from Jamaica to Panama was pretty much uneventful except the traveller broke and the wind wasn’t as consistent as predicted which meant we had to motor more than expected.  Not a problem, we arrived in Panama and was time to get ready for the Panama Canal Transit.
Posted by Sandy at 2:00 AM
Email ThisBlogThis!Share to TwitterShare to FacebookShare to Pinterest
Location: Montego Bay, Jamaica