We left Isla Mujeres on April 25th and arrived the Tampa Bay channel on April 27th around 11 p.m sailing the entire trip.  Thank goodness because as we entered the channel, we dropped the sails and started the engines and immediately noticed no water exiting the port engine which meant if we continued to run the engine it would overheat.  So, we shutdown the engine hoping the problem was just a matter of replacing the impeller.  It was something that we'd troubleshoot later for now we were focused on transiting the channel.  We continued motoring down the Tampa Bay channel with only the starboard engine and keeping watch for large ships transversing the channel.  It seemed to take forever but we made it safely through the channel and anchored at Egmont Island dropping the hook around 1 a.m.  After a few hours of sleep, we moved and anchored near DeSoto Point where we originally planned on staying the weekend.  However, after our nap we woke and determined that due to weather concerns we would not be staying the weekend but instead head straight to Twin Dolphin Marina.

We spent about a month and a half getting the boat in tip top shape (i.e. engine maintenance, rigging inspection, additional equipment installation, etc.), moving our possessions out of storage and onto the boat, finding a place for our stuff on the boat, provisioning, cleaning and then selling the RV (Molly), and also preparing for our guests to arrive Janie (Rankin's mother) and Dash (Rankin's niece).  Sometimes pictures do not speak louder than words. 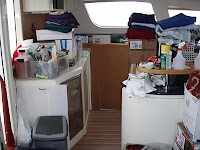 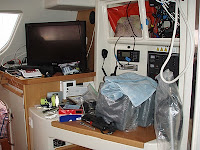 Janie arrived on Saturday, June 11th and of course we had everything ready ... hardly.  Janie begged us for boat chores so we kindly obliged and put her to work.  She vacuumed, assembled our wine rack, washed dishes and laundry, and yes, she even cleaned the windows.  She did everything with a big smile on her face or maybe that was just for the camera.  Thanks for all your help Janie you're wonderful!! 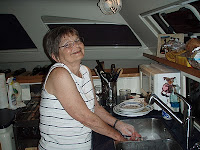 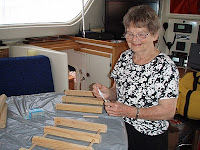 The boat was finally starting to come together.  It seemed like a good time for a day sail.  Rankin and Janie have family in Tampa, so it was time for a day sail.  JoAnna (Janie's cousin) and Sheldon (Joanna's husband) along with their daughter, Erin, son-in-law, Patrick and grandson, Ben came over for a fabulous day cruise.

We were practically ready and just in time for Dash's (Rankin's niece) arrival on Tuesday, June 14.    Dash had just had a birthday so we had belated birthday party.  The next day we had another celebration with Janie's cousin Leah enjoying a nice dinner at Mattison's.

I just discovered this site ... thank you, Sandy, brings back great memories! Janie